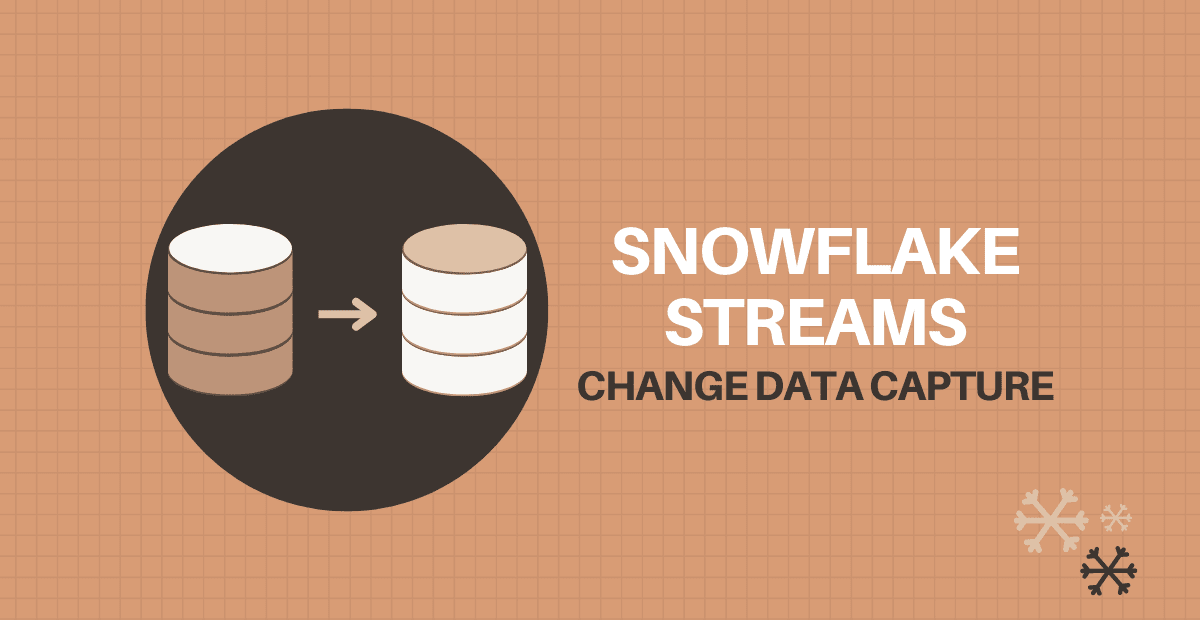 Change Data Capture (CDC) is a process that identifies and captures changes made to data in a database and then delivers those changes in real-time to a downstream process or system. There are several proven methods through which CDC can be implemented like making use of Audit Columns to identify the data that has been modified since the data last extracted.

In this article let us discuss about Snowflake’s own offering which provides CDC capabilities.

What are Snowflake Streams?

A Stream is a Snowflake object that provides Change Data Capture (CDC) capabilities to track the changes made to tables including inserts, updates, and deletes, as well as metadata about each change, so that actions can be taken using the changed data.

A Stream creates a “Change table” which tracks all the DML changes at the row level, between two transactional points of time in a table. The Change table mirrors the column structure of the tracked source object and includes additional metadata columns that describe each change event.

Streams can be created to query change data on the following objects.

Streams work by keeping track of an offset, a pointer which indicates the point in time since you last read the stream which is referred as a transaction.

Once the data in the Stream is consumed by a downstream table or a data pipeline in a DML transaction, the change data is no longer available in Stream. Only the subsequent changes made on the table are captured by Stream until they are again consumed by a consumer.

As stream advances its offset only when it is involved in a DML transaction, the data consumed by streams is very minimal. Therefore, you can create any number of streams for an object without incurring significant cost. Hence Snowflake also recommends creating separate stream for each consumer.

There are three different types of Streams supported in Snowflake

A Standard (i.e. delta) stream tracks all DML changes to the source object, including inserts, updates, and deletes (including table truncates). Supported on standard tables, directory tables and views.

The syntax to create Standard stream is as below

An Append-only stream tracks row inserts only. Update and delete operations (including table truncates) are not recorded. Supported on standard tables, directory tables and views.

Supported for External tables only. An insert-only stream tracks row inserts only. They do not record delete operations that remove rows from an inserted set.

The syntax to create Insert-only stream is as below

Demo on how Snowflake Streams Work

Let us understand how streams work through an example. Consider a table named EMPLOYEES_RAW where the raw data is staged and the data finally needs to be loaded into EMPLOYEES tables.

The table named EMPLOYEES_RAW is created and three records are inserted.

Let us create EMPLOYEES table and the for the first load lets copy data from EMPLOYEES_RAW directly using Insert statement.

The data now in EMPLOYEES_RAW and EMPLOYEES table are in sync. Let us make few changes in data of raw table and track the changes through a Stream.

Initially when you query a stream, it will return null records as there are no DML operations performed yet on the raw table.

Let us insert two records and update two records in the raw table and verify the contents of the stream MY_STREAM.

In the Stream we can observe that

Before consuming the data from stream, let us also perform another DML operation on already modified data and see how stream updates its data.

Note that streams record the differences between two offsets. If a row is updated and then deleted in the current offset, the delta change is a delete row.

The same can be noticed for the employee record with ID = 102 where the data is first updated and then the row is deleted. So the stream only capture the delta change which is delete.

Consuming data from a Snowflake Stream

In the above discussed example, though we have inserted 2 records, updated 2 records and deleted 1 record, the final changes required to be captured from raw table are 2 inserts, 1 update and 1 delete.

The below select statements on the stream gives the details of records which needs to be inserted, updated and deleted in the target table.

Finally we can use a MERGE statement with the Stream using these filters to perform the insert, update and delete operations on target table as shown below.

The below image show that the merge operation inserted 2 records, updated 1 record and deleted 1 record as expected.

Now that we have consumed the stream in a DML transaction, the stream now do not return any records and is set to new offset. So if you need to consume for multiple downstream systems from a stream, build multiple streams on the table, one for each consumer.

To view the current staleness status of a stream, execute the DESCRIBE STREAM or SHOW STREAMS command. The STALE_AFTER column timestamp indicates when the stream is currently predicted to become stale.

To avoid having a stream become stale, it is strongly recommended to regularly consume the changed data before its STALE_AFTER timestamp.

If the data retention period for a table is less than 14 days, and a stream has not been consumed, Snowflake temporarily extends this period to prevent it from going stale. The period is extended to the stream’s offset, up to a maximum of 14 days by default, regardless of the Snowflake edition for your account.

Note that this restriction does not apply to streams on Directory tables or External tables, which have no data retention period.

To summarize, Snowflake streams are a powerful way to handle changing data sets. Streams can be queried just like a table which makes it easy to grab the new data in a table. A stream only stores an offset for the source object and returns CDC records by leveraging the versioning history for the source object.

Snowflake table streams are also often used in conjunction with other features, such as Snowflake Snowpipe and Snowflake tasks. Be sure to check out our other blog posts for more details about Snowflake features. HOW TO: Connect Snowflake from Informatica Cloud (IICS)? HOW TO: Find and Kill long running queries in Snowflake? HOW TO: Get DDL of database objects in Snowflake?